Singer Of The Month

Each month I'm going to do a post featuring a particular singer. This month I'm featuring the Turkish Belgian singer Hadise. 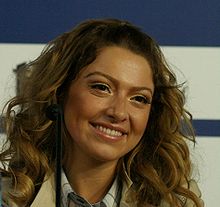 Born on 5th October 1985, Hadise Açıkgöz   grew up in Belgium but has Turkish heritage. She was a contestant in the Belgian TV singing contest Idool 2003 and although she didn't get through to the final, was later offered a record contract.  She released her debut single Sweat in 2004, followed by her debut album, also called Sweat in 2005. Hadise went on to release 4 more albums (two Turkish language and two English language), Hadise, Fast Life, Kahraman (translated as Hero) both of which came out in 2009 and her latest Aşk kaç beden giyer?

As well as being successful in her home country, Asia and other European countries, Hadise has a Turkish fanbase. In 2009 she represented Turkey in the Eurovision Song Contest with the song Dum Tek Tek and came fourth. Unfortunately she isn't well known in the UK, which is a shame because I think she'd do well. Her music is a mixture of Eastern and Western style pop and some of her songs are  more R'n'B or dance. She also branched out into TV presenting when she had jobs on TV singing contests Turkiye Popstar and the Belgian version of The X Factor.

Popular posts from this blog

February 23, 2019
Back in September I did a post about the American reality TV show Unexpected. You can read it here: https://starsparklex.blogspot.com/2018/09/unexpected.html

There have been two seasons (or series as we also call it in the UK) so far. There will be a 3rd one  featuring mums Lexus, Mckayla and Chloe (Chloe joined in Series 2). Emiley who joined in Season 2, says she isn't returning (see below) so. Laura (who also joined in S2) will also not be back (see below for more on that). Original cast member Lexus shared a casting call on her Instagram page in November, so it seems the company is looking for new girls due to give birth from March to June 2019. Check out the post here; https://www.instagram.com/p/BpzfLAjg8ek/

The gossip site Starcasm also reports that Unexpected's producers are casting for a new programme: https://starcasm.net/unexpected-producers-casting-pregnant-teens-from-same-high-school-or-tap-program-for-new-reality-series/

Unexpected (full title Unexpected: Teenage & Pregnant) is an American reality TV series following the lives of pregnant teenagers and their partners, and their journey into parenthood. It's the TLC version of the hit show 16 and Pregnant, which spawned the spin off Teen Mom. The first series/season was shown last year, and Series 2 was shown in the US this summer and has just started in the UK.

All 3 of the girls' mums were also teen mothers, and in Lexus' case her grandmother was a teen mum too.


S2 catches up with Mckayla and Lexus, and introduce some new girls and their boyfriends. I'm focusing mainly on the girls here, like with my Te…
Post a Comment
Read more

TM: Young and Pregnant UK follows 4 new girls- Charlie, Alisha, Laura and Charlotte who are all expecting babies. When TM UK started only Mia Boardman was pregnant but this time all of the mums were pregnant during filming. (Which makes sense since this is "young and pregnant"! lol).

Promote your Page too